Pay for cozy in installments, through Shop Pay.

How to Choose a Duvet Cover? Best Duvet Covers for your Home and Budget

All you need to know about getting the perfect bedding duvet materials.

It can be quite the fun when furnishing your home sometimes - whether it's a new home you just moved into recently, or just some refurbishing and new furnishings here and there. Well, there are some other times, it can be quite frustrating, especially when it comes to making decisions - decisions on the materials and beddings to use.

Duvet covers have been used for a long while now as great bedding sheets in homes for the warmth, softness and comfort they provide. It's important to get the right duvet cover for your home so you have maximum comfort while sleeping (which is the main reason you got yourself a bed in the first place). Not only that, you'd want bedding materials that match the whole colour and aesthetic quality of your bedroom and make your space more personal and comfy.

Now, getting that perfect duvet cover you so much need may not be feasible based on your budget, or maybe the case is that you find it kind of difficult to come down to a choice. We aim to deal on this aspect in this article, so do well to read on and get for yourself a lot of helpful tips to make the right choice on which duvet covers to go for in your home.

What's more important? The Cheapest or the Finest…

When you want to purchase a duvet cover, the two most popular considerations are between quality and price. And the goal of making the best duvet choice is to balance both - to get the best and finest duvet cover that would serve your purpose yet within your budget.

Let's first of all, see the types of duvet covers there are.

So, about the types of duvet covers, we'd generally be referring to the type of materials used to make the covers. It's necessary to know and consider these types of material before making your choice as each of them have situations they either are best for or incompatible with.

Bamboo Duvet Covers are one of the best for luxury and very appreciable aesthetically. Within the Bamboo Duvet Cover segment there are covers made from 100% Viscose from Bamboo. These are very breathable, anti-sweat and extra soft to give you premium relaxed moments on your bed.

This type has the advantage of being least expensive since it's made of synthetic material - polyester. It also withstands fabric wrinkling. It creates extra warmth though and is best only for those who prefer much warmer beddings else you'd have to endure many sweaty nights.

Cotton duvet covers are thick enough yet have little maintenance requirement, hence, a popular choice and the most commonly used in homes. The material is soft, comfy, easy to wash, and protects your duvet well.

To make the right choice to suit your needs, there are a lot of things to consider and some questions to ask yourself to assess what exactly you'd need.

Know that you can choose to get more than just one duvet cover - in fact  it's advisable to do so, so you can always interchange them whenever you need to do the laundry or for a different aesthetic appeal as you wish, or even due to climate and weather changes.

You may also want to look into what type of bed style before determing which duvet cover and if you need a duvet cover or a duvet for a European vs Scandinavian Bed Style.

Let's see some factors you should consider.

What Type of Sleeper are you?

This question deals with how "light" or "cozy" you like to sleep. Some individuals are less sensitive to cold nights and prefer to sleep with as little clothing clutter as possible. If you feel you belong to this category, you should ensure to get the duvet with the right material - preferably bamboo, and of moderate size so you can have the right comfort during sleep. Different types of bed blankets offer a different amount of warmth.

Some other individuals as well who like to feel as cozy as possible and would want to get the most possible warmth they can from the bedding materials available. Such individuals would like thicker duvets and duvet covers as well as larger sized materials.

There are yet others who like it in between - not so warm, not so loose, or maybe would like to constantly change the warmth levels depending on the needs for the night. If you're like this, you should get something somewhat in between in lightness - probably a bamboo duvet cover. You can also get more than just one - a thicker one and a lighter one to change between when you need to. Last, you can get a Snug Bamboo Duvet cover that is soft and warm on one side but has cool bamboo on the other for those in between people.

Your bedding not only adds warmth and cozyness but it also helps create a wonderful space for your home.

What's the climate of your environment at night?

Still about the material of the duvet covers to buy, you should put into consideration the climate and weather factors of your environment or geographic location. In hotter areas, as a general rule of thumb, duvets are less thick and lighter (or may not be used at all) while in colder regions, the duvet covers have to be thicker, bigger and weightier to give maximum warmth at night. Some might even use more than one per night.

So, while you're at it considering other factors and making your choice of duvet covers, do not neglect this aspect so you'd not end up with a beautiful expensive duvet cover that unfortunately either can't keep you warm during your sleep or is just too thick and is a bother instead of comfy.

Is it just for your personal use, kids, or a couple's bed?

Depending on who will be using your duvet cover and how many people, the size of duvet covers vary. And don't think for a second that size doesn't matter! - it does, a lot.

Firstly, your duvet cover should match the size of the duvet itself. You don't want a situation whereby your duvet within is just loosely shifting about from side to side in the duvet cover, or one whereby the duvet can't fit in. Also, the duvet and of course, the duvet cover too, should be quite larger if it's for a dual bed - maybe for your kids or for you and your spouse unlike a smaller duvet cover would do for a single use bed.

Who uses the bed and duvet cover also determines the type of duvet cover to get. It makes it easier to use durable and  easy-to-maintain material duvet covers for your kids beds. If it's just for personal use, then you might be prioritizing the beauty of the duvet covers.

How does it blend in with your colour taste as well as the look of your bedroom?

As much as duvet covers are bought to provide comfort and ease in sleep, they are very much bought for decorative and beautification purposes too in the bedroom. It's not a good idea to get a duvet cover just because it's comfortable but has dull patterns and little or no aesthetic values.

So, consider how pretty the duvet cover is too, and how it blends in well with your bedroom colours. Your room is most probably well designed to your taste as well as decorative features in the room and duvet covers add significantly to room beauty if they match or blend in right. Most really beautiful duvet covers are pretty expensive though and may be way out of budget and the goal is to get the best within our budget, isn't it?  They may also be difficult to maintain or prevent from stains and wear-and-tear, don't forget that.

How much is your budget for a duvet cover?

This is a very important criterion to getting the right duvet cover - if not the most important though. A duvet cover is just one of many furnishing items and materials you need to have in a bedroom, not to mention all needed to have in the home in general, especially if it's a new home you're redesigning. Try to stick to the budget plan you have cut out for the duvet cover while searching to pick the best duvet cover available.

Know though, that duvet covers do not come cheap and may cost more than you expected. Just make sure you don't break the bank in trying to get a good one. Also, don't go for an inferior duvet cover that wouldn't serve the purpose well enough when your budget can accommodate a better one.

Some of our top picks of duvet covers:

We have also checked out some of the best duvet covers there are at budget friendly prices, you might want to check out too.

Sunday Citizen Snug Bamboo Duvet Cover: This Duvet cover is a popular choice for its warm and fuzzy feel, it's made of 100% microfiber on one side and 100% viscose from bamboo on the other side. It is good for all climates and seasons as it has both fuzzy and smooth sides and offers breathability and coziness.

What is the difference between duvets and duvet covers?

Think of the relationship between the duvet and duvet covers as you would the relationship between the pillows and pillow cases at home. Duvets are also commonly mistaken for comforters. The difference here is that a comforter is just a piece of material quilted and woven with fluffy material instead of being filled in with a duvet, while a duvet is essentially two in one - that is  the duvet in the duvet cover.

Must my duvet covers match my room colours?

One thing to look out for when choosing a duvet cover for your home is the beauty m, colours and pattern  of design on the duvet cover. This pattern and colour blend should match with your room's overall colour. Now, it must not exactly match the room colours but there must be a blend so it can add to the room decor. For example, the room walls may be grey and the beddings white - it still goes. The point is to just make sure they are not two different colour tones that have no chemistry at all. Even if the duvet cover pattern is very fine, it would not look nice in an oddly themed room.

Where can I get good duvet covers?

You can purchase duvet covers and other bedding materials online very easily or at almost any home furniture shop around your locality. It's up to you then to choose the perfect ones. Buying duvet covers online is very easy as most suppliers now offer free shipping and free returns. You can test your duvet cover before you keep it.

What's the ideal size of a good duvet cover?

Congratulations on having been introduced to this level of home decor knowledge!

Now, you should know how best to go about getting your perfect duvet cover for your home and for your budget. You can go ahead to add some beauty to that bedroom of yours.

Remember, the whole idea is to get the most beautiful duvet covers that blend well with your room aesthetics, are comfortable enough and well durable, and yet fit into your budget. Easy-peasy, isn't it? 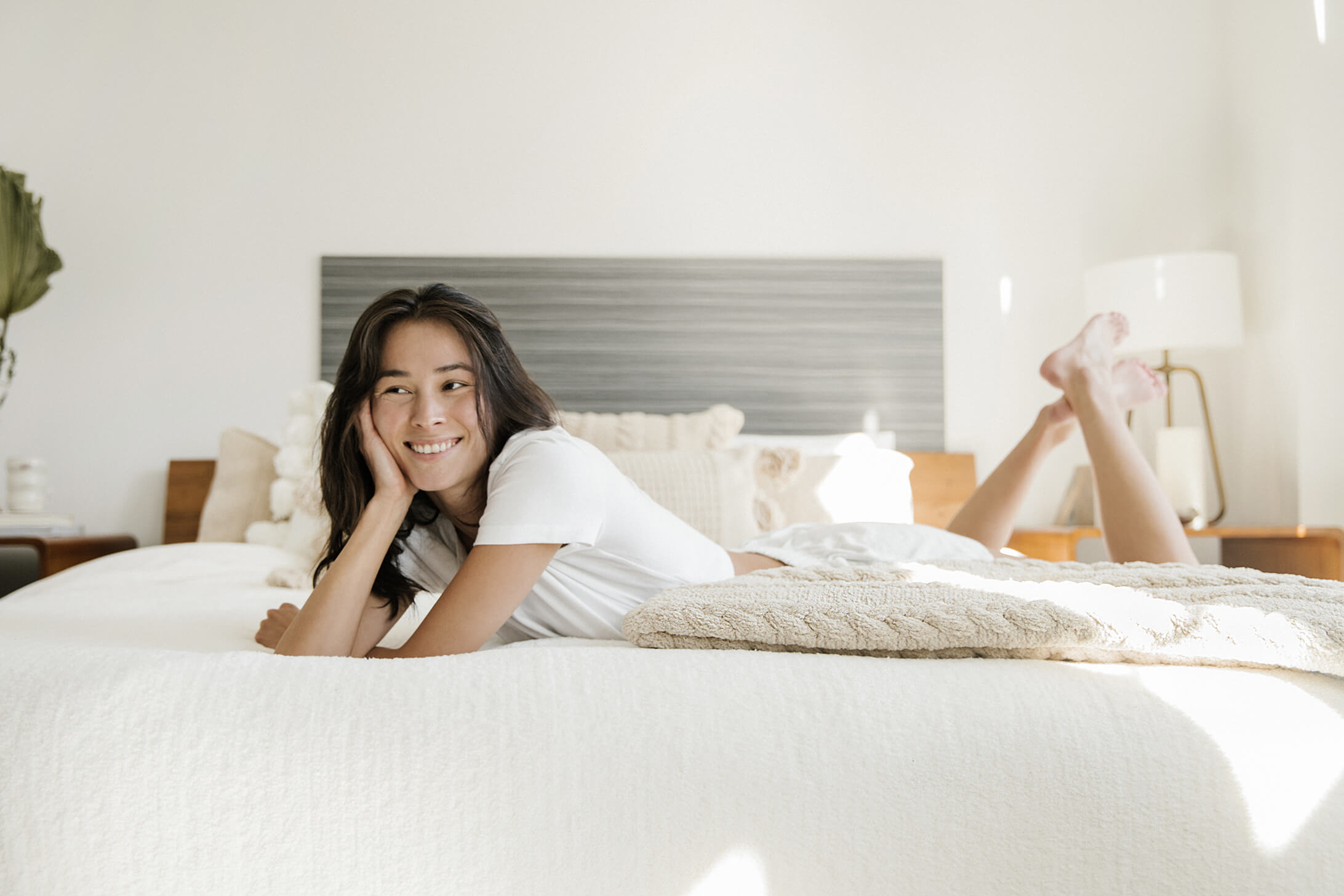 How To Fill a Duvet Cover?

How to Celebrate Mental Health Awareness Month at Work